Implementing a PBIS framework in any school takes a commitment to development, staff training and coaching, and following through. As a school moves forward through the school year with PBIS, areas that need additional attention often come to light. Applying PBIS principles to specific areas in a school (like cafeteria behavior) will encourage improvement in those areas, as was the case at Goldsmith Elementary in Louisville, Kentucky.

Jefferson County Public Schools is the 27th largest public school system in the United States. With 150 schools and more than 100,000 students, JCPS educates students from Pre-K through high school. As part of JCPS, Goldsmith Elementary is a K-5 school with approximately 600 students. In the spring of 2015, the school piloted PBIS Rewards with their fifth-grade and their teachers. Based on the feedback from staff following this testing period, Goldsmith rolled out PBIS Rewards schoolwide for the 2016-17 school year.

The cafeteria can present challenges in student behavior. Because students must sit quietly during class time, lunch represents an opportunity to release pent-up movement and noise. However, lunch periods are short, and students must find time to eat as well as be social with classmates.

Goldsmith cafeteria’s Golden Spatula program is a special project of Goldsmith Assistant Principal Michael Hill. “The teaching staff felt it was needed,” he says. “Kids were coming back from the lunchroom restless and agitated. Maybe there had been an issue between two students during the lunch period. Maybe the noise level was too high. Whatever the reason, teachers had to spend the first ten to fifteen minutes of post-lunch class time helping students get settled down again. It was affecting instructional time.”

Hill remembered a program he had seen at another school, which was designed to improve behavior in the cafeteria. The principles of that program were adapted to the needs of Goldsmith and became the Golden Spatula program. In the Golden Spatula program, the cafeteria manager evaluates the classes that enter the cafeteria each day for proper lunchroom conduct. This includes sitting, eating, and talking in a respectful manner. Students are encouraged to pick up everything they need for lunch in one trip through the lunch line, including utensils, napkins, and condiments. Forgotten items can be retrieved by raising a hand and asking for them instead of getting up to get them without permission. Conversation is encouraged at a reasonable volume level. Students also help to maintain cafeteria cleanliness by picking up after themselves and helping to clean up spills. 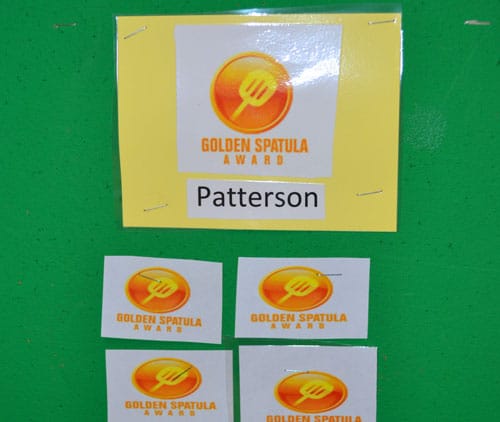 Applying PBIS principals to specific areas allows for measurable improvement in those areas, and beyond. Since the implementation of Golden Spatula, students arrive back in the classroom better prepared to settle in. “Now, there is less of a need to decompress after lunch,” says Hill. “It’s increased instructional time for every class.”

Points totals in the Golden Spatula program are a reflection of class behavior as a whole. These points are separate from individual points that students earn via PBIS. This allows students who may have challenges in earning points to experience the benefits of rewards as part of a group.

One of the biggest benefits that Mr. Hill sees with PBIS Rewards is the software’s dashboard component. “I can see at a glance who is on board and who is struggling. This gives administration an opportunity to approach those staff members and ask, ‘how can I help?’ It helps us to identify areas that need attention and individuals who can benefit from coaching.” Because teacher buy-in is important to the success of PBIS, reaching out to teachers who may be struggling makes PBIS more successful for all.

In many schools using PBIS, only teachers have the ability to award points. PBIS Rewards extends this ability to every adult in the school, from administration to support staff such as custodians and cafeteria workers. “PBIS Rewards helps to create respect for other staff. It extends authority beyond the teaching staff and places it in the hands of everyone who encounters our students. To use PBIS Rewards, each staff member must build relationships with the kids. Including our extended staff in this effort teaches respect for everyone, not just teachers.”

Adopting a PBIS framework helps to change staff perspectives. “Before PBIS, the Goldsmith staff knew which students were more likely to act out,” says Hill. “Now, after a year using PBIS Rewards, we’re more likely to know the students who are doing good things. It has allowed us to focus more on positive behaviors. We’ve seen a decline in unwanted behaviors.”

The key to a successful PBIS framework is being proactive rather than reactive. Poor behavior will still occur, and there will still be consequences for that behavior. But as Hill notes, “The difference that PBIS has made is that now, students are more likely to recognize when they need a time out. They are behaving responsibly and learning to treat others respectfully.”

Applying PBIS principles to specific areas, such as Goldsmith’s Golden Spatula program, teaches students the power of working together as a group to exhibit positive behavior. PBIS Rewards makes it easier for anyone on staff to recognize individuals and groups for positive behavior. Want to know more? We offer free, live, online demos!